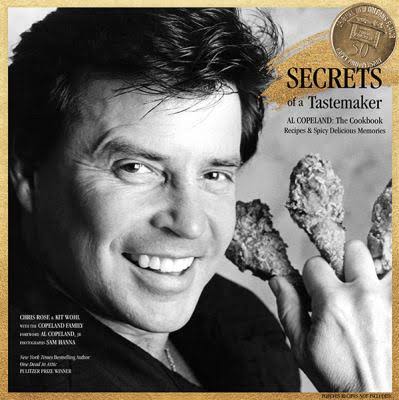 Al Copeland Jr. and author/artist Kit Wohl will be at The Garden District Book Shop to celebrate the release of Secrets of a Tastemaker: Al Copeland The Cookbook. Sharing over 100 recipes and countless stories about larger-than-life Al Copeland, founder of Popeyes Famous Fried Chicken and Copeland's Restaurants of New Orleans, by Pulitzer Prize-winning and New York Times best-selling author Chris Rose, and Kit Wohl with the Copeland Family and foreword by Al Copeland Jr.

Credited, in part, for bringing Cajun and Creole cooking to the national forefront, Al Copeland parlayed success as founder of Popeyes into Copeland's Restaurants, introducing even more offbeat and ground-breaking ideas into the international restaurant scene. Al, Jr., his son, has followed as an innovator and creative driving force. They melded their Cajun and Creole cooking heritage into methods, combinations, and techniques as the art and love of cooking. While Popeyes was acquired by Restaurant Brands International Inc. in 2017, the beloved fried chicken chain remains an integral part of the Copeland family story. Expect a behind-the-scenes look at how the empire was built, but know that no Popeyes recipes will be divulged in the book.

Al Copeland, or Big Al as he was affectionately referred to, was known to have a phenomenal knowledge of food and flavor and a remarkable palate that allowed him to break down and combine flavors. This book marks the first time proprietary techniques, recipes, seasoning, and spice combinations Big Al helped hone have been released. Can’t miss recipes include the Buttermilk Biscuits, Sweet Heat Chicken, Ricochet Catfish, Fettuccine Lamborghini, and Cajun Duckanoff.

The festivities will kick off with bites and beverages from the cookbook provided by Copeland’s. Notably, the Copeland’s food truck will be there to serve up tasting portions of Blackened Bayou Chicken with Madeira Mushroom Dressing, Crawfish Tasso Cream and Pecan Crust No-Bake Cheesecake, alongside full-sized portions of Copeland’s signature dishes available a la carte.Copies of the cookook will be available for purchase through The Garden District Book Shop.

Secrets of a Tastemaker: Al Copeland - The Cookbook (Hardcover)