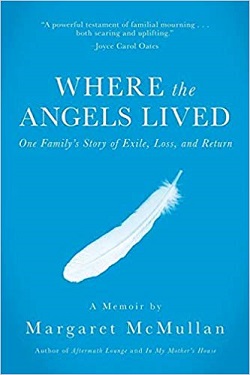 The moment she discovers the existence of Richard, a long-lost relative, at Israel’s Holocaust Museum, Margaret McMullan begins an unexpected journey of revelation and connectivity as she tirelessly researches the history of her ancestors, the Engel de Jánosis. Propelled by a Fulbright cultural exchange that sends her to teach at a Hungarian University, Margaret, her husband and teenage son all eagerly travel to Pécs, the land of her mother’s Jewish lineage. After reaching Pécs, a Hungarian town both small and primarily Christian, Margaret realizes right then and there how difficult her mission is going to be. Heart-wrenching, passionate and insightful, Where the Angels Lived beautifully documents the relentless determination of a woman picking up the pieces of her family’s fragmented history throughout the Hungarian Holocaust.

Historical, authentic and family-oriented, Where the Angels Lived tells the tale of a somewhat parallel universe that exists even in the 21st century—dealings with Soviet-style bureaucracy; skepticism; anti-Semitism; and ironically the same sort of isolation and rejection Margaret’s Jewish Hungarian family experienced in 1944 before they were forced into concentration camps. Straddling memoir and reportage, past and present, this story reminds us all that we can escape a country, but we can never escape history.

Margaret McMullan discusses and signs her book, Where the Angels Lived: A Memoir.