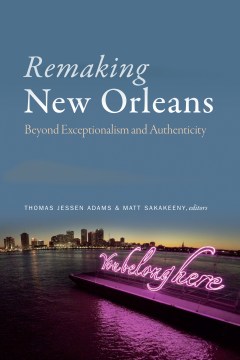 Mimi's in the Marigny, 2601 Royal Street

Drink specials and food will be provided.

Come join Matt Sakakeeny and Thomas Jessen Adams to celebrate the release of their new collection, Remaking New Orleans: Beyond Exceptionalism and Authenticity upstairs at Mimi's in the Marigny, 2601 Royal Street, New Orleans, 70117.

Adrienne Dixson will introduce the book and followed by some brief comments from Matt and Thomas, as well as other contributors including Suzanne-Juliette Mobley, Bryan Wagner, Cedric G. Johnson, Rien Fertel, and more.

Approached as a wellspring of cultural authenticity and historical exceptionality, New Orleans appears in opposition to a nation perpetually driven by progress. Remaking New Orleans shows how this narrative is rooted in a romantic cultural tradition, continuously repackaged through the twin engines of tourism and economic development, and supported by research that has isolated the city from comparison and left unquestioned its entrenched inequality. Working against this feedback loop, the contributors place New Orleans at the forefront of national patterns of urban planning, place-branding, structural inequality, and racialization. Nontraditional sites like professional wrestling matches, middle-class black suburbs, and Vietnamese gardens take precedence over clichéd renderings of Creole cuisine, voodoo queens, and hot jazz. Covering the city's founding through its present and highlighting changing political and social formations, this volume remakes New Orleans as a rich site for understanding the quintessential concerns of American cities.