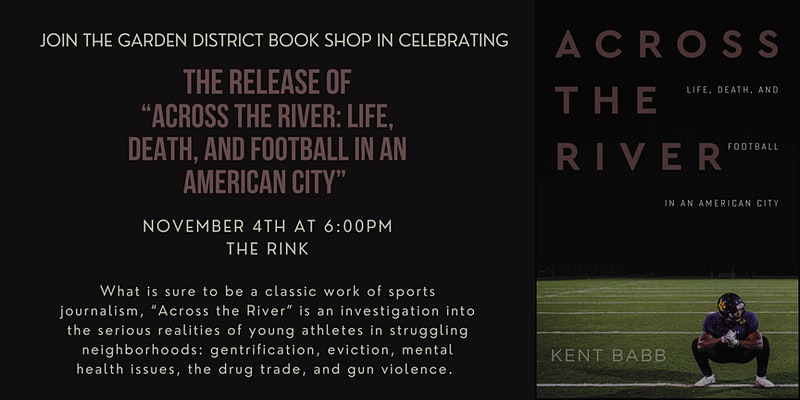 THE GARDEN DISTRICT BOOK SHOP HOSTS KENT BABB TO CELEBRATE HIS NEW RELEASE, ACROSS THE RIVER: LIFE, DEATH, AND FOOTBALL IN AN AMERICAN CITY

The Garden District Book Shop is thrilled to host an evening celebrating the recent release of award-winning sportswriter Kent Babb’s, Across the River: Life, Death, and Football in an American City.  What is sure to be a classic work of sports journalism, Across the River  is an investigation into the serious realities of young athletes in struggling neighborhoods: gentrification, eviction, mental health issues, the drug trade, and gun violence. ​Also, notably, ​George Clooney ​and Grant Heslov’s Smokehouse Pictures ​has purchased the film rights to Across the River.

All state-mandated COVID safety protocols will be in place. Masks are required. Proof of vaccination or a negative PCR test result within 72 hours of the event is required.

Babb first told the inspiring story of Coach Brice Brown in the Washington Post. Now, Babb goes deeper, widening the narrative with intimate portraits of the Edna Karr High School players, staff, and surroundings in an ever-tested community. Blending aspects of such disparate classics as Friday Night Lights, The Yellow House, and Ghettoside, Babb’s accomplished multi-character narrative illuminates many lives and captures the pulse of New Orleans in all its turbulence, complexity, and defiance.

The story begins on the west bank of the Mississippi in the New Orleans neighborhood of Algiers. Short on hope but big on dreams, its mostly poor and marginalized residents find joy on Friday nights when the Cougars of Edna Karr High School take the field. For years, this football program has brought glory to Algiers, winning three consecutive state championships and sending dozens of young men to college on football scholarships. An epidemic of gun violence plagues New Orleans and its surrounding communities and has claimed many innocent lives, including Brown’s former star quarterback, Tollette “Tonka” George, shot near a local gas station. Although he is preparing for a fourth title, head coach Brice Brown is focused on something else: keeping his players alive.