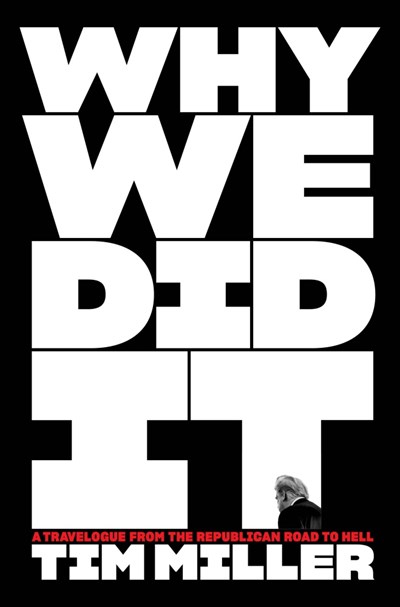 Author Event for Tim Miller's - Why We Did It: A Travelogue from the Republican Road to Hell

Former Republican political operative Tim Miller will be at The Garden District Book Shop  for an in depth discussion and signing of his book Why We Did It: A Travelogue from the Republican Road to Hell, an anguished yet entertaining exposé of how the Republican party became enthralled with Donald Trump. In Why We Did It, Miller answers the question no one else has fully grappled with: Why did average Americans go along with the worst of Trumpism?

As one of the strategists behind the famous 2012 RNC “autopsy,” Miller conducts his own forensic study on the pungent carcass of the party he used to love, cutting into all the hubris, ambition, idiocy, desperation, and self-deception for everyone to see. In a bracingly honest reflection on both his own past work for the Republican Party and the contortions of his former peers in the GOP establishment, Miller draws a straight line between the actions of the 2000s GOP to the Republican political class's Trumpian takeover, including the horrors of January 6th.

Why We Did It is a vital, darkly satirical warning that all the narcissistic justifications that got us to this place still thrive within the Republican party, which means they will continue to make the same mistakes and political calculations that got us here, with disastrous consequences for the nation.

The event will  begins with welcome reception including select beverages and light bites. Miller will then be in-conversation with The New York Times’ national political correspondent and author of This Will Not Pass, Jonathan Martin. Miller and Martin walk guests through some key insights from Why We Did It, and the discussion will be followed by a brief Q&A. Miller will then be available to personalize books for guests. Copies of Martin’s This Will Not Pass will also be available for purchase.

Entrance to the event requires purchase of Ticket through Eventbrite (See above link).

All citywide-mandated COVID safety protocols will be in place.