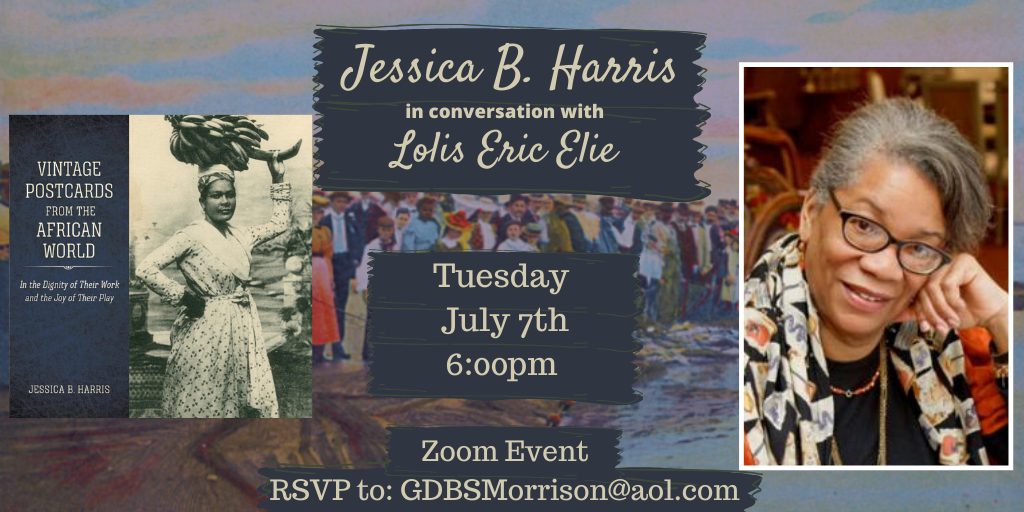 This event is free however an RSVP is required (no later than Noon CST on the day of the Event).

If you would like to attend please RSVP to GDBSMorrison@aol.com

Join us for this very special Zoom event with professor and culinary historian, Jessica B. Harris in conversation with Lolis Eric Elie as they discuss Jessica's new book, Vintage Postcards from the African World.

For over forty years, Jessica B. Harris has collected postcards depicting Africans and their descendants in the American diaspora. They are presented for the first time in this exquisite volume. Vintage Postcards from the African World: In the Dignity of Their Work and the Joy of Their Play brings together more than 150 images, providing a visual document of more than a century of work in agricultural and culinary pursuits and joy in entertainments, parades, and celebrations.

Jessica B. Harris is author, editor, or translator of seventeen books, including twelve cookbooks documenting the foods and foodways of the African diaspora. She lectures and consults widely in the United States and abroad and has written extensively for scholarly and popular publications. Recently retired after five decades of teaching at Queens College, CUNY, Harris is the recipient of numerous awards for her work including an honorary doctorate of humane letters from Johnson and Wales University. She was recently inducted into the James Beard Cookbook Hall of Fame.

Lolis Eric Elie is a New Orleans born, Los Angeles based writer and filmmaker. Most recently, he joined the writing staff of the Amazon series "The Man in the High Castle." Before that, he wrote for the OWN series "Greenleaf" and the HBO series "Treme." Working with the award-winning director Dawn Logsdon, he co- produced and wrote the PBS documentary, Faubourg Treme: The Untold Story of Black New Orleans. His essay, “America’s Greatest Hits,” is included in Best African American Essays: 2009.

Vintage Postcards from the African World: In the Dignity of Their Work and the Joy of Their Play (Hardcover)