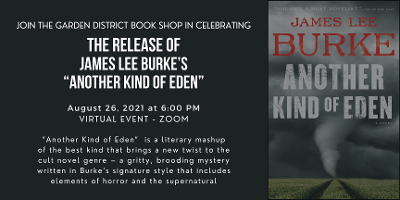 During the Zoom, Burke will share insights into “Another Kind of Eden” and be in conversation with The Tampa Bay Times’ Colette Bancroft. The book discussion will be followed by a lively Q&A.

Interested parties can register for the free event on Eventbrite. Zoom links will be sent to the emails provided the day of the event.

Aspiring novelist Aaron Holland Broussard observes the American west from the open door of a boxcar, doing farm work from the San Joaquin to the Tex-Mex border, dealing with dreams from a forgotten war and trying to save his soul. Outside Trinidad, Colorado, among the pastoral paradise of golden wheat fields, mist-filled canyons, and frolicking animals, Aaron falls in love with Jo Anne McDuffy, a beautiful and fiercely intelligent painter whose heart is dedicated to finding justice for the poor. But their relationship is troubled from the start by a predatory professor connected to a bus-traveling commune and the rapidly spreading drug culture. Aaron’s arrival in town also draws the attention of a sinister businessman and his son who wield their influence through vicious cruelty, dragging him into an investigation of grotesque murders. To Aaron’s dismay, he discovers that the Eden he has found may be a den of witches. Followed by a mysterious shrouded figure who might not be human, Aaron will have to face down all these foes to save the life of the woman he loves – and his own.

Another Kind of Eden is a literary mashup of the best kind that brings a new twist to the cult novel genre – a gritty, brooding mystery written in Burke’s signature style that includes elements of horror and the supernatural. Through Aaron and Jo Anne, Burke gives us a nostalgic novel that excavates the beauty and idealism of the 1960s to show the ugly that lies just beneath the surface. The result is an astute exploration into the battle between good and evil, into those who do what’s right instead of what’s easy.