No more than 7 customers are allowed in the shop at a time. You may wait in the Atrium if we reach capacity.

Please enjoy browsing the book shop by doing the following:

Thank you for your support and enthusiasm for the store during this time. We are so happy to be your booksellers. Our goal is to get you the books you want as safely, quickly, and pleasantly as possible. We appreciate your cooperation.

Feel free to call us 504.895.2266
Thank you for all your continued support.
Britton Trice and the Krewe at Garden District BookShop 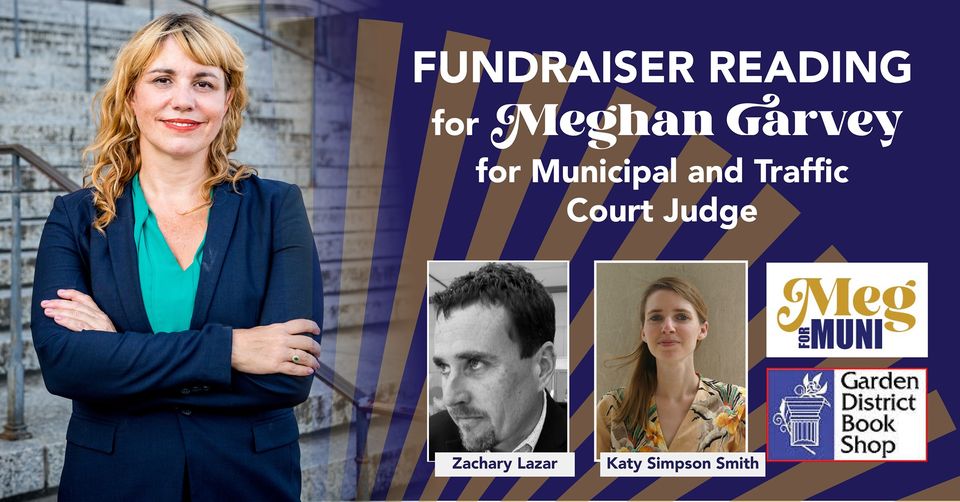 Join in on an engaging conversation and book reading with New Orleans authors Zachary Lazar (Vengeance) and Katy Simpson Smith (The Everlasting).

With a minimum donation of $25 to Meg's campaign, we will send you a link to access the event via Zoom (and a recording to view at a later date). Thank you for your support!

Meg Garvey is a career public advocate running for Municipal and Traffic Court Judge in New Orleans --- a court that is in desperate need of change from the inefficient, backlogged, and dangerous status quo.

Zachary Lazar is the author of five books, including Sway, Evening’s Empire: The Story of My Father’s Murder, I Pity the Poor Immigrant , and Vengeance . He is a recipient of fellowships from the John Simon Guggenheim Foundation, the Hodder Fellowship from Princeton University, and the 2015 John Updike Award from the American Academy of Arts and Letters, among other honors.  His most recent book, Vengeance, confronts the criminal justice system head on as he tells the stories of real and fictional inmates at Angola State Penitentiary. He is a frequent contributor to the New York Times Book Review, and his journalism has also appeared in the New York Times Magazine, NPR’s All Things Considered, the Los Angeles Times, BOMB, and elsewhere.

Katy Simpson Smith's writing addresses elemental questions of good and evil, obedience and free within the historical contexts of American chattel slavery and, more recently, Roman history. She received a PhD in history from the University of North Carolina at Chapel Hill and an MFA from the Bennington Writing Seminars. She is the author of We Have Raised All of You: Motherhood in the South, 1750-1835, and the novels The Story of Land and Sea, Free Men , and The Everlasting. Her writing has also appeared in the New York Times Book Review, Paris Review, Los Angeles Review of Books, Oxford American, Granta, and Literary Hub. She lives in New Orleans, and recently served as the Eudora Welty Chair for Southern Literature at Millsaps College.

The Everlasting: A Novel (Hardcover)

Evening's Empire: The Story of My Father's Murder (Paperback)

I Pity the Poor Immigrant: A Novel (Paperback)

The Story of Land and Sea: A Novel (Paperback) 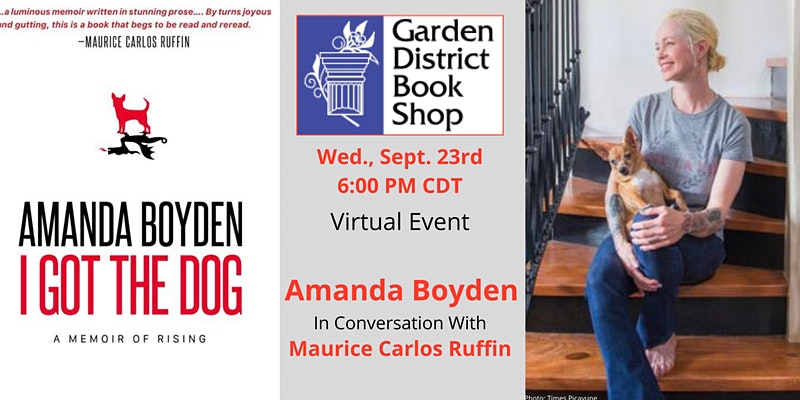 Join us for a virtual evening with Amanda Boyden in conversation with Maurice Carlos Ruffin discussing, I Got the Dog: A Memoir of Rising.

This is a ticketed event. Each ticket includes a $5 coupon good toward the purchase of I Got the Dog.

I Got the Dog has teeth. Amanda Boyden’s memoir is unflinching,poignant, raw, sometimes hilarious, sometimes brutally painful—the self-portrait of a woman unafraid to scream into the universe: I survived this! And this. And this. Follow my lead. Dog tails Boyden from childhood in Chicago to adult heartbreak, from a devastating rape as a young woman, reexamined and illumined by distance, to the crushing end of her marriage to a famous Canadian author, destroyed by infidelity and another woman’s pregnancy. Boyden hasn’t just survived, though. She chooses to rise. She gets up from the pavement and dusts herself off. She stands and says: You, too,can do this. This memoir finds joy in the details, courage in family,beauty in the natural world, and salvation in a little chihuahua who hangs in there through thick and thin.

Click the book cover to see the many titles available for Pre-Order.  Some signed, some unsigned ...some with special swag. 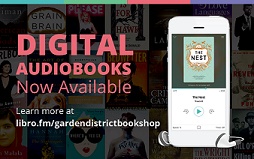 Garden District Book Shop is proud to partner with Libro.fm to provide you a great audiobook experience.
Click here to join Libro.fm and order many fabulous audiobooks.

This feature require that you enable JavaScript in your browser.
END_OF_DOCUMENT_TOKEN_TO_BE_REPLACED

For Email Marketing you can trust.

END_OF_DOCUMENT_TOKEN_TO_BE_REPLACED

This feature require that you enable JavaScript in your browser.
END_OF_DOCUMENT_TOKEN_TO_BE_REPLACED